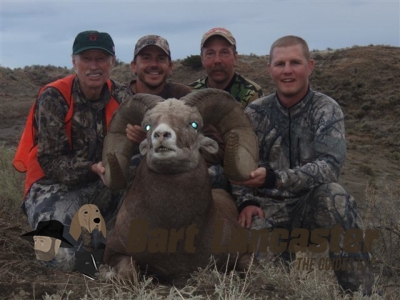 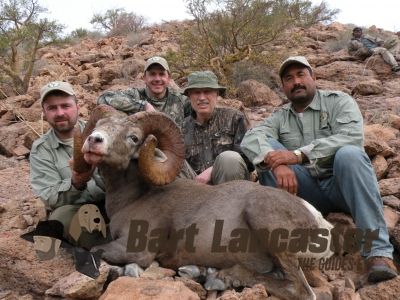 The fog rolled past the window of our flying milk carton, Irish built cargo plane refer to as the Short. We had riding and packsaddles aboard, plus pack boxes and food for 10 days. I was heading in to guide a contract sheep hunt I had lined up for hunter Jim Anthony from Pickens South Carolina. My good friend and past guiding partner Niel (Nige) Graham was coming along to help as well. This was the first part of September and a beautiful time of the year to be in the Northern Mountains of British Columbia. We were working on leg four of Jim’s 700 point plus slam of rams, having already taken 195 Montana bighorn with Willie Hettinger, 181 Dall sheep and a 178 Desert sheep. 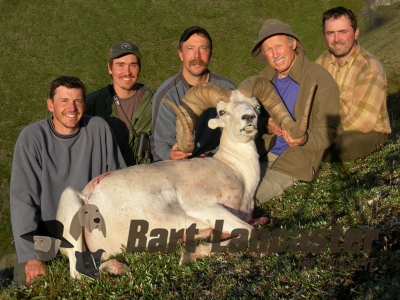 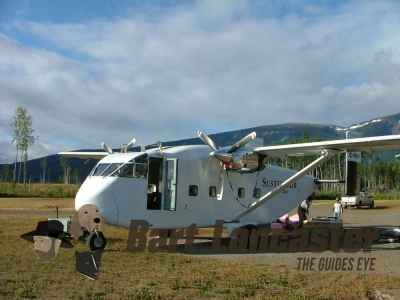 We landed on a dry brown grass wheel strip after dumping our nose through a whole in the fog. Our decent was fast and well flown by another of the great northern bush pilots that number our country. We dumped some building supplies for the neighbouring outfitter, hitched our gear into a riverboat and soon found our base home after an adventurous river ride. The next morning Jim and I were up early greeted to the sound of horse bells that the wrangler and Nige had on the way in already. I helped with the quick catch and tie before our breakfast. Ahead of us was a nine and half hour horse ride through mountain trails. We threw half tuck single diamonds on three packhorses to go along with our three riding horses. This first ride would be stage one of our two days of travel necessary to get to our sheep country. We would be led by the outfitter for the first third of the ride and then accompanied by the wrangler to a small cabin base.

The valleys of the North in the first part of September are fulfilling to say the least. Vast expanses of color, orange, yellows and reds creating a rustic blend of beauty. The plateaus and valleys are in full color cut by deep timber green along the valley edges. Creeks small enough to pose no threat but large enough to respect. Creeks reflecting sparkles from the sunrays and splash from the pack horses feet on your back. This is a land that you feel. There is no down time of emotion. Emotion’s topped by daydreams of the Stone ram you hope to find.

We rode into the spattering of meadow’s and reflective lake valley with a small cabin right at the edge of dark. The outfitters crew greeted us warmly along with another client who was hunting moose and caribou. We were damp from the afternoon rain and the warmth of the cabin was welcome. We shared hunting stories and discussed tales of hunts past that were wrote on the cabins walls. These tales of monster caribou, wide moose and long horned sheep are often what your night’s dreams are created from. It was a good evening and one I will always remember. 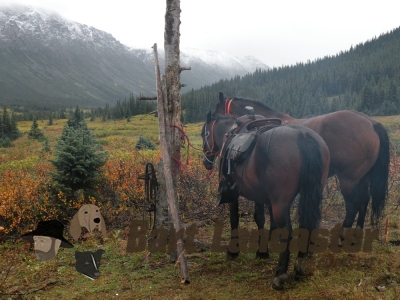 Well the afternoon rain from the day before was the lead cloud for the front that was now settled upon our morning valley. Water dripped from all the willow and it was a classic day where you wish to crawl back into your hole and stay there. Persevering we swung saddles over wet withers and tightened cinches around a good group of six horses we would have for the remainder of our hunt. Niel proclaimed this was a men from the boys day and I just wanted to be a gopher. The rain was now snow and life was going to be miserable. 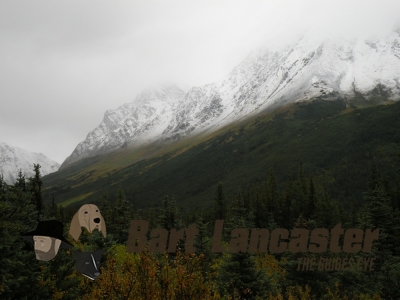 The ride was slow as horses fought mud on the trail and soft boggy ground. This was the terrain that kept all others except the foolish ones out of this part of the world. Snow piled up on my horses neck and plastered my body as we chugged through thickets. I asked Nige if he wanted to take lead. Of course on this day he pointed out I was the uide and would have to remain in the front, “wasn’t Nige’s first picnic”. Even Jim who likes to jog in front of his horse and lead it to death was forced to ride. We picked our way around a mountain and up a beautiful valley, even in this weather. Five hours had usat a traditional sheep camp where we unpacked a horse to get at some extra snacks. I smartly commented to Nige as we started to glass, “okay, this is what we brought you along for, get spotting a ram”. It wasn’t two minutes later and Nige goes, “ohoh Mr. Ram there you are”. Ducking in and out of little washes high up the slope on the branch valley was a ram. I quickly got my scope on him just before he ducked into another wash. Holly he looked like a dandy! About five minutes later when the ram worked its way into view he had grossly shrunk! Huh I thought, and then here came Mr. #2 and that made better sense. All three of us quickly developed the sheep shake, this was a dandy ram!

Tarps were flying and hiking boots were getting ripped out of pack boxes and rubber boots stuffed back in. Packs were getting stripped off packhorses along with saddles. We had suddenly and officially found our nights camp spot. We tied and hobbled the packhorses and swung into our saddles. We could ride about 40 minutes closer to the sheep before we climbed and in this wet brush and mud that was crucial distance.

We tied our horses off on a bench of the slope, stripped extra weight and were climbing. We were aiming to a pocket basin up to the right of the two rams. Once in the basin we would climb to the back and role left to shoot a couple hundred strait across. Reaching the mouth of the basin our angle allowed us another look at the two rams. The smaller ram was about 36-37 long and light based showing 8 years of age. The big guy was wide flaring and 10 years plus, broomed at the ends. We figured in the 38-inch class with good weight. Jim and I have had a goal for many years to shoot a book slam, we only lacked the stone sheep and with further inspection of this ram we were quite sure he would not make it but was too good to pass up. That is another reason I like hunting with Jim, he is a realist and loves to shoot. In his classic form Jim stated, “Lets go snap him”. So Jim twisted Nige and I by the arm and we were off…

The climb sucked!!! I don’t know if it was the wet ride, rain gear or soft steep slope but all three of us were sucking wind. We did crest finally but holly heck it hurt a bit. Wet is wet and we defined it. I guess we should have purchased some of that fancy rain gear which breaths. I love it when people say that, “oh I will be fine my rain gear breathes”. No you won’t be fine, you’re going to be wet from the inside out when you hike in wet weather. “Now that is fact”.

We crested carefully after cooling our faces down and cleaning optics. The smaller ram was a little lower feeding and our big guy was bedded. We were shooting ridge to ridge and in a couple steps our big guy could be gone. So we did the natural thing, we didn’t play around and got to shooting. When I glanced back once I almost came back around to line Jim up on the wrong ram, but that worked itself out and we weren’t left with a sob story! Jim smoked him right behind the front shoulders and the ram was quickly doing a nose skid!

Have you ever seen a ten pound rock zip off a steep grass face? Well that is about the speed our ram reached in 40 feet. Yippy kye yey, we were watching potential disaster when miraculously our ram caught some rocks in a little wash and slowed to hold. One hundred and fifty yards is a good compromise compared to the potential five hundred lus we had faced. Making it over to the ram was a careful feat. If we slipped on the steep grass we would end up like our ram in forty feet, but we made it and you know the rest. 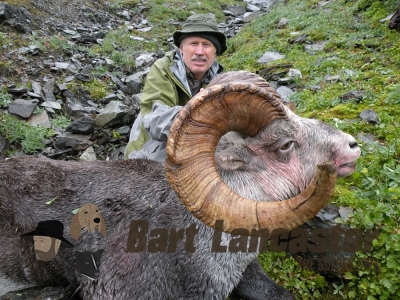 This September 2009 Stone Sheep was a beauty. 37 ½ long with 14-inch bases, we green scored him at 165 and he official scored 163, but that is a little typical, don’t all us hunters score our animals a little more than they are! The ram was also 11 years old. Nige, Jim and I were pretty happy campers, coming into new country and walking out with a big old ram after only two days. Fourth day found us at base camp and the fifth day found us having supper at my home in Smithers. Two weeks later my wife Callie and I had our second healthy child. I am so glad I have an understanding wife because we could have been chasing rams a bunch more days. 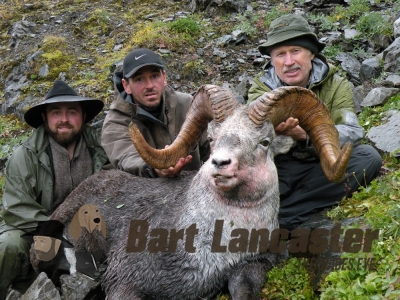 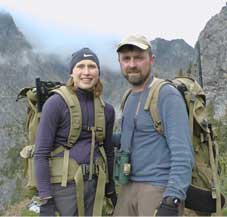